Welcome to the first in a series of blogs by The Rover P6 Club on managing a classic car club in the digital era. The Rover P6 Club has been particularly successful through the integration of key Social Media and online outlets and in this series we want to bring our experiences to the wider community, backed up by our own statistical analysis of how to successfully use the “new” online tools available to all of us, for free, to enhance our presence, demonstrate our effectiveness and allow the Club achievements to be the sole driver of WHY people should join our clubs.

In 2012 when the authors joined the managing committee of The Rover P6 Club, membership numbers were falling, magazines were late, membership satisfaction was at an all time low, general Club administration was in severe disarray, online presence was restricted to a poorly designed, visually unattractive dysfunctional website, and a Facebook page that was not integrated, lacked direction and consisted of postings made by one person.

The success seen by The Rover P6 Club in recent times has seen the popularity of the Club soar to levels never previously heard of, with a resulting double-digit growth of membership numbers annually over the last two years. 2014 alone saw Club growth of 25% and in 2015 the trend is continuing. Growth is not achieved by just attracting new members alone. Just to stay static, the number of new members must equal the number of leavers! In 2014 we saw a monumental 40% growth in new members joining the Club, coupled to that our overall attrition rates fell by 50% from previous levels. The combination of these two factors ensures that the growth of the Club has become established.

To put these figures into perspective, we need to look at how the classic car sector is performing as a whole. There are no accurate figures for this, but the closest approximation can be gleaned from the data of the Federation of British Historic Vehicle Clubs. According to the FBHVC Annual General Meeting, between 2013 and 2014, for those member clubs, there was an average drop in club membership across the classic car club sector of 2.5% as shown in the diagram below 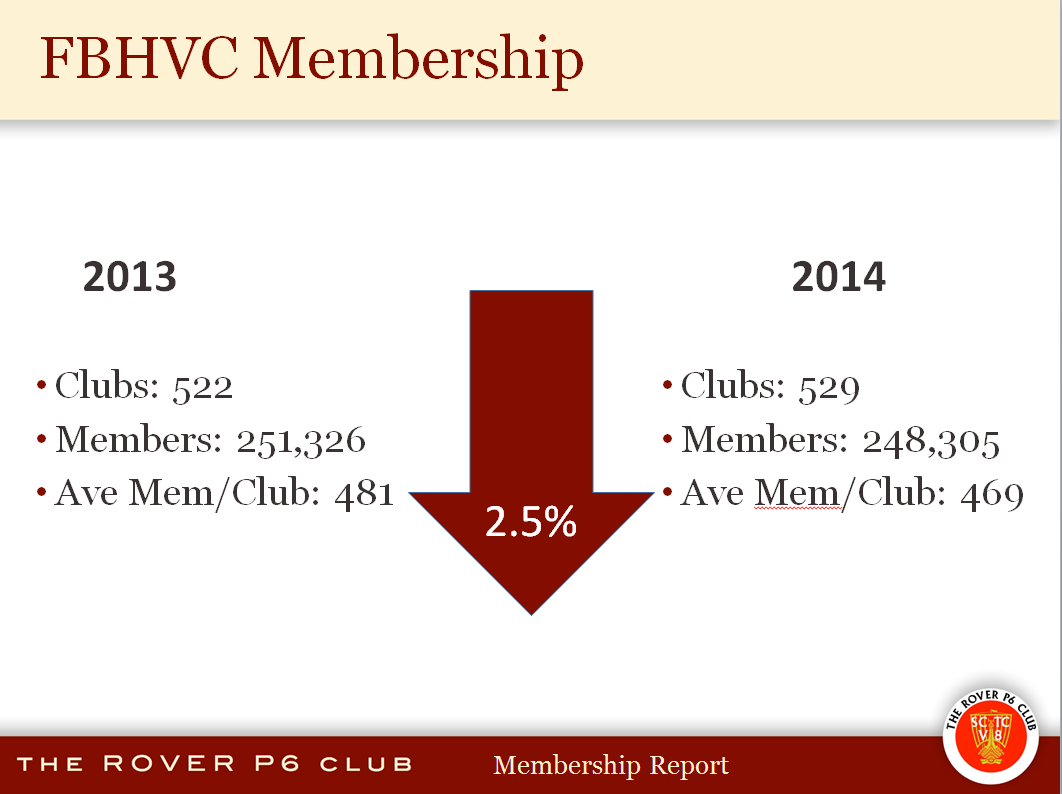 There has been no specific explanation given for this apparent drop in overall membership levels of classic car clubs, but if some reports in the media are to be believed, the rise of Social Media might have a part to play. In our next article we look at turning this hypothesis on its head and look to the future about how online communities of forums and Social Media channels can actually benefit the classic car clubs, increase market share and bring new life to clubs and the classic car industry as a whole.

In this series of fourteen articles, we want to share our findings so that all classic car clubs may be able to benefit. It is not a magic formula, but a series of well thought-out and part-proven strategies that work together in harmony to deliver benefits to the Club. The topics we will be covering in our future articles are:

A look at the use of facebook in today’s world, the evolution of online knowledge from the 1990s to today and ask the question “Is Facebook really killing the classic car club?”. We discuss many of the problems associated with such media channels and addresses how the power of global online communities can contribute and play an important role for the classic car club

We look at our own experiences of membership levels that remained generally static year to year, meaning that the numbers of members joining the club roughly equalled the number of members leaving. We compare that to the rise in Social Media and look to the future of how the two can co-exist for mutual benefit

Part 4 - What is the goal of a classic car club?

While the title might seem obvious, when we were searching for inspiration in the creation of our digital strategy for The Rover P6 Club, we found many interpretations. Without fully appreciating what we are trying to achieve as our goal, our digital strategy could easily fall foul. Here we discuss what our goal is for The Rover P6 Club and how we used our online presence to reinforce it

The underpinning philosophy of The Rover P6 Club.

Throughout the next three articles we will discuss the Promotion philosophy of The Rover P6 Club and how we use Social Media, the Club website and other channels to achieve our goal.

Throughout the next three articles we will discuss the Engagement philosophy of The Rover P6 Club and how we use Social Media, the Club website and other channels to actively engage with our membership regularly, the importance of regular engagement and building the sense of belonging to the Club.

In this article, we describe the levels of support required by our membership, the feedback that we’ve received and the mechanisms that help us deliver. The concept of the Support philosophy is not restricted to how the Club supports the membership, but also, how the membership supports the Club.

A club can only grow its membership base if the number of new members outstrips the number of leavers. In this article we discuss strategies to combat natural attrition.

Part 14 - Summary - Has the philosophy worked?

We take a look at some of the statistics and analytics from The Rover P6 Club to see how the philosophy has boosted the membership of the Rover P6 Club, provides the  expected benefits to Club members and continues to grow at unprecedented levels with high levels of membership satisfaction.

Brian Humphreys and Michael Allen have led the digital transformation of The Rover P6 Club since joining the managing committee in mid 2012. 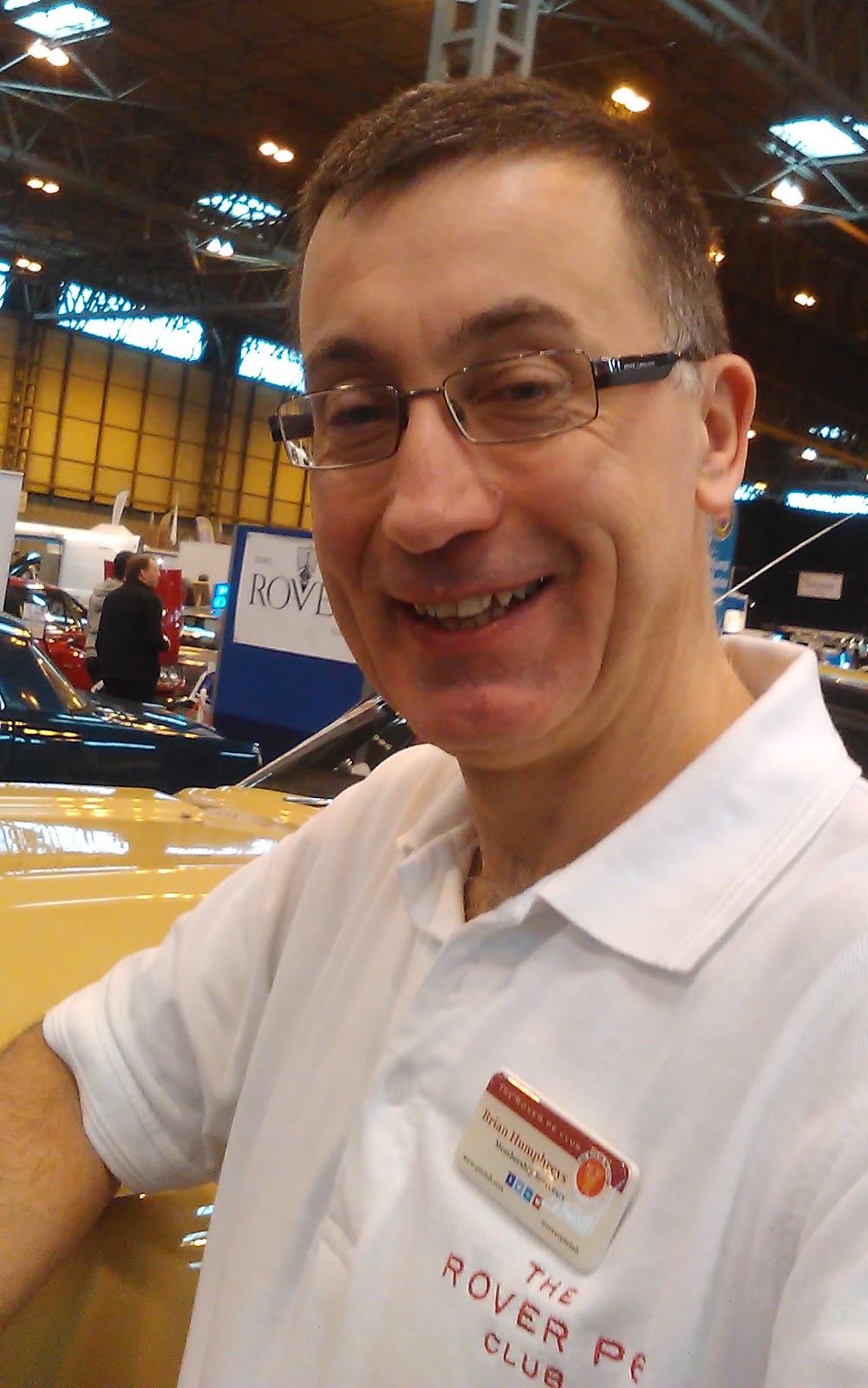 Brian Humphreys is the Membership Secretary of the Rover P6 Club and a Client Delivery Executive for Hewlett Packard Enterprise specialising in IT outsourcing services in the Public Sector. Brian has automated The Rover P6 Club membership system harnessing multiple data manipulation strategies, built the Club website from scratch based on the Club philosophy, introduced collaboration technologies for magazine production and is a part of the Club’s editorial team. 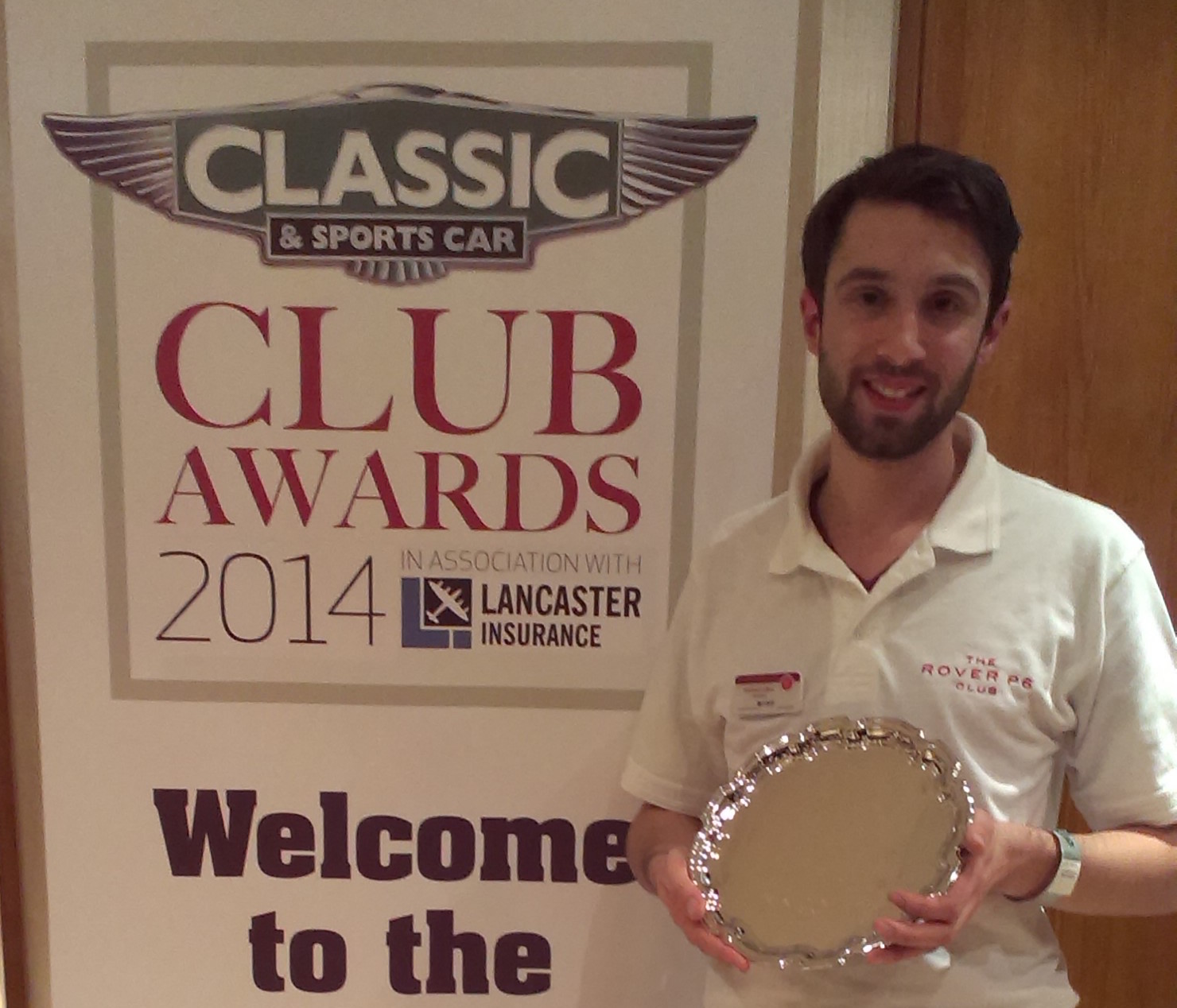 Michael Allen is the Secretary of The Rover P6 Club and a Salesforce.com consultant specialising in marketing and data analysis. Michael is part of the Club's editorial team, developed and deployed the consistent visual branding and messaging of the Club throughout all media, initiated the re-birth of the Club's Social Media presence, and sets the strategic direction of the Club. In 2014 he won the Classic and Sportscar Club Award for Best Contribution by a Youngster.

Next time: Is Facebook Really Killing the Classic Car Club?